HJF has dozens of doctors, scientists, and medical researchers on its staff, but it only has one art therapist. Her name is Kristin Ramsey. Like the rest of her colleagues, Kristin’s mission is to advance military medicine and she does it with art. Kristin is employed with HJF through a partnership with Tracy's Kids, a nonprofit that helps young cancer patients and their families cope with the emotional stress and trauma of the disease and its treatment.

“I use art therapy to help kids navigate around medical trauma and family stress,” says Kristin. “It’s not arts and crafts, but more of a psycho-social therapy. You can really see the impact.”

When you arrive at the Pediatric Hematology/Oncology Clinic where Kristin works, the first thing you notice beside the front desk is a tree that towers over the waiting area. Bright green leaves cover its branches. A cheerful birdhouse rests on the highest branch. A rock garden with painted stones surrounds the tree’s trunk. It’s just one of many art projects completed by former patients of Kristin and now on display in the clinic.

After majoring in architecture at Penn State, Kristin realized it wasn’t something she wanted to pursue as a career. When she learned about art therapy, she decided to study for a master’s degree. Now Kristin is part of a team of care providers that works with young patients with cancer and blood disorders.

Every morning Kristin starts her day in a huddle with doctors, nurses, a social worker, and other professionals to go over the patients for that day. The staff tell Kristin they feel like they get to know the patients better from observing them at the art table. “They really see the value of art therapy,” she says. 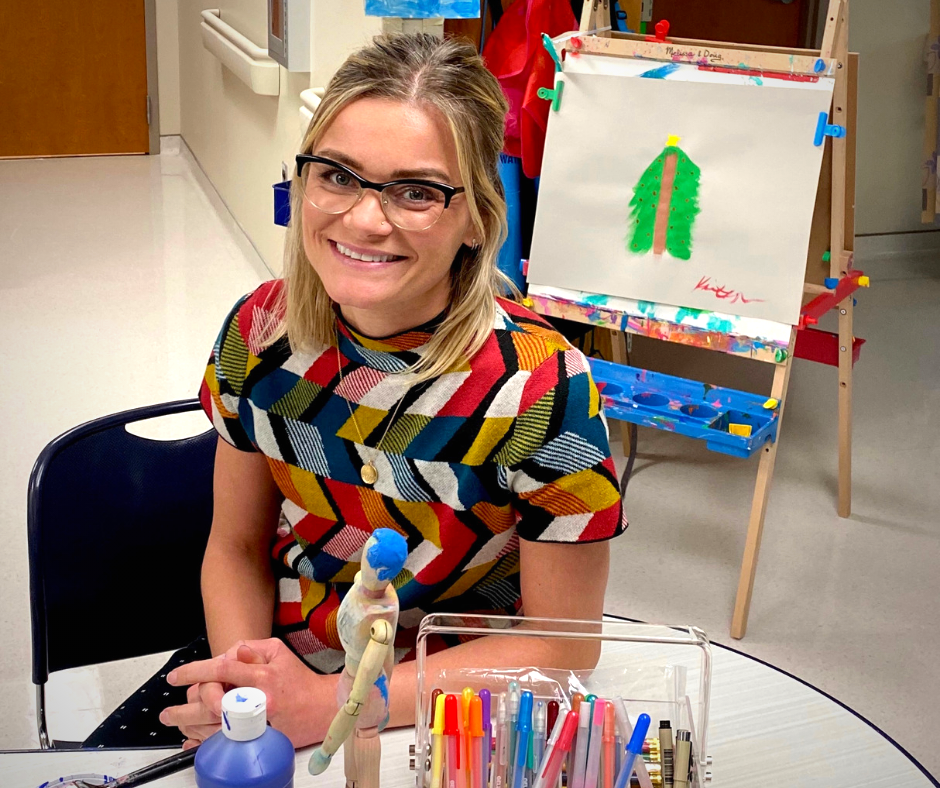 Adjacent to the front desk, patients requiring outpatient medication rest in comfortable reclining chairs or hospital beds along a corridor with art tables loaded with tubes of paint, brushes, and other visual arts materials. Strategically placed easels await their next artist. Smocks hang from the side of an art cabinet that features a large colorful mural. Kristin describes it as a place for congregation and community building, both for the patients, which include infants, children, adolescents, and young adults, as well as their parents and siblings. “We use art as a preventive—not reactive—therapy,” she says.

In addition to the tree in the waiting area, her patients have created a wide range of projects: paintings, sculpture, mixed media collages, handmade sewn books, costumes, and more. Sometimes the artwork will document their journey. A 10-year-old girl filled sterilized empty eggshells with paint and glitter. She named each egg after something that frustrated her about her treatment and threw them against a large canvas that became a painting she later took home. A five-year-old boy created a miniature statue of a super-hero that became an alter ego for him to cope with an arch nemesis (his illness). When he finished his treatment, it turned out the young patient no longer needed his alter ego.

The mother of an eight-year-old girl with leukemia has special praise for Kristin. After their Army family relocated from Colorado to Northern Virginia for treatments, her daughter was struggling emotionally and had angry outbursts at school. The mother described how Kristin and the eight-year-old talked, brainstormed, drew, and also created a "calm down" bracelet, which was a visual cue of strategies she could use for keeping calm.

“After working with Kristin, Sarah was a different child,” says the mother. “Art therapy helped Sarah work through her feelings. It has been crucial in the healing of her whole person.”