The Henry M. Jackson Foundation for the Advancement of Military Medicine, Inc. (HJF) received notice of allowance for a patent from the United States Patent Office (USPO) for a medical countermeasure to organophosphate (OP) nerve agent exposure. Among OP nerve agents is the deadly chemical weapon, Sarin. Led by Maria F. Braga, DDS, PhD, a professor of Anatomy, Physiology and Genetics, and Psychiatry in the in the School of Medicine at the Uniformed Services University of the Health Sciences (USU), researchers identified a neuroprotective combination therapy that is effective against OP exposure. The therapy was shown to be effective even with delayed use following nerve agent exposure. This innovation was patented by the USU/HJF Joint Office of Technology Transfer.

Without pharmacological intervention, OP nerve agents can cause seizures which can have serious effects, such as brain damage, coma, and even death. Currently, treatment for OP exposure is with an anticholinergic agent administered immediately after exposure; thus, military personnel may receive kits containing atropine auto-injectors for use in the event of a nerve-gas attack.

Dr. Braga’s combination therapy of Tezampanel (a drug originally developed by Eli Lilly for migraines) in conjunction with Caramiphen (a drug used in Parkinson's disease) provides protection against the debilitating effects of OP exposure. The advantage of this therapy is that it reduces excessive glutamate released in the brain (which causes seizures) and protects the brain from any secondary damage caused by glutamate toxicity. In animal models, this therapy fully protected against neuronal damage and demonstrated protection superior to current treatments.  Importantly, this new combination therapy also extends the therapeutic window, as it is effective even when administered hours after OP exposure.  In a mass casualty scenario, when it may take significant time to access and treat those affected, this capability may save lives.

This patented combination of Tezampanel and Caramiphen has a synergistic effect and is shown to be superior to using Tezampanel alone. These benefits are also expected to translate to lower dosage requirements, fewer potential side effects and an increase in tolerability. This new technology, along with more than 200 other technologies, is available for license from HJF. Learn more at hjf.org/tech. 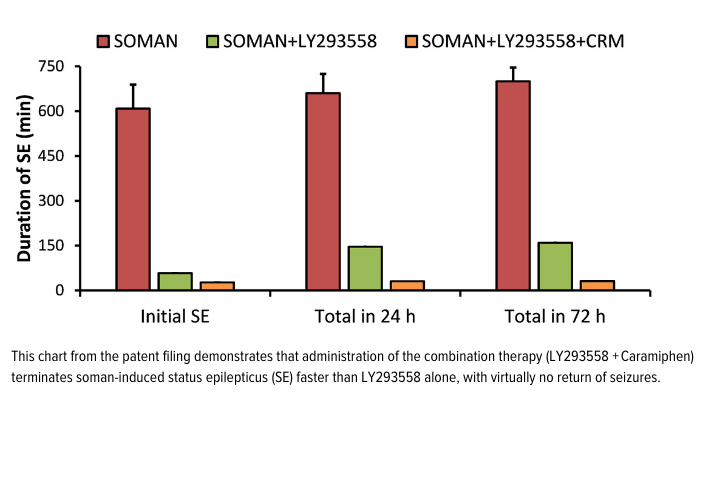 The patent grant notification was issued by the USPO on March 1, 2021.

Research for this technology was conducted at USU; however, the information or content and conclusions do not necessarily represent the official position or policy of, nor should any official endorsement be inferred on the part of, USU, the Department of Defense, or the U.S. Government.

The Henry M. Jackson Foundation for the Advancement of Military Medicine, Inc. (HJF) is a global nonprofit that administers more than $500 million in medical research funds annually. For more than 35 years, HJF has partnered with researchers and clinicians to provide bench to beside to battlefield research support. More than 3,000 HJF teammates ensure HJF is a trusted and responsive partner by providing scientific, administrative and program operations services to researchers in the military, academia, and private industry. For more information, visit hjf.org.